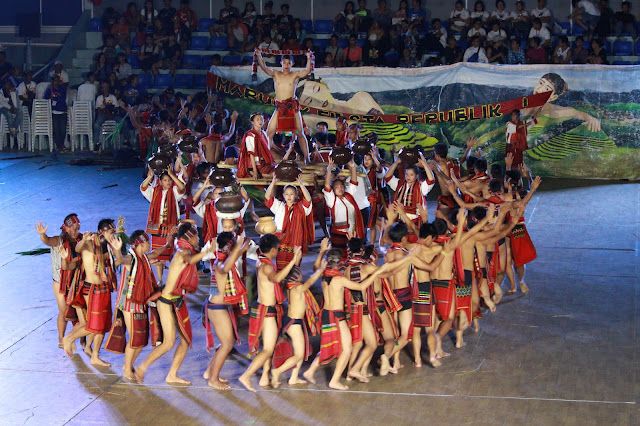 Lubon National High School theater arts group portray how the Igorots defended their land, life and culture from foreign invaders during the 2017 Dulansangan in Malolos, Bulacan

Everybody loves to win. Who wouldn’t? The exhilaration of getting first to the finish line, the joy of triumphantly holding up a trophy or a medal, the elation one feels when declared a winner- these are what everyone who joins a competition is fighting for. Thus, anyone joining a competition will give their all and even go beyond their limits just to get their one shot to triumph.

This was the goal of the Lubon National High School students when they represented Mt. Province and the Cordillera Region in the National Category of the Dulansangan 2017 held last January 23, 2017 at Malolos, Bulacan. The Dulansangan is a national street dance-drama competition showcasing historical vignettes being staged in the streets depicting a distinctive heroic event in each participating delegation’s locality. There are three levels of the competition- local, provincial and national. The participants went through a rigorous training in theater arts for the last six months under the supervision of Mr. Ventura Bitot and the faculty and staff of Lubon National High School. Although most of the participants are neophytes, they endured cutting short their sleeping time and performing under unfavorable weather conditions just to polish their acting skills. It was a labor of love, a genuine show of partnership and cooperation among the stakeholders, the school and the community. They felt prepared to beat team Malabon who has been the consistent winner for the past years.

During the competition the participants had given their best to bring to life the story of how the Igorots stood their ground against foreign invaders and how they rebuilt their community after the war. It was a story missed by those who wrote Philippine history so this was their chance to show how the Igorots kept their identity intact despite the Philippines’ long history of being under foreign rule. The Honorable Mayor Anthony Wooden of Tadian played the dual role of General Mc Arthur and as the community’s elder. The crowd was awestruck, maybe partly because it was their first time to see so many g-stringed Igorots gyrating to the sound of gongs. The kids too were instant celebrities. People kept coming up to them for “selfies” and “groufies,” and they didn’t mind at all. As one student said, “It was a chance to show that we Igorots are not the short, dark-skinned, curly- haired primates with tails that textbooks usually portray us to be.”

Unfortunately, it is not the group who gets the most number of fans and who has the biggest audience impact that always wins. It was a competition after all and the performances were judged according to given rubrics. It was a big disappointment when Mt. Province had to give up its spot in the top three- Lubon National High School Theater   Arts’ first taste of defeat. It was a bitter pill to swallow as there can be no excuse for losing especially in competitions. There are only lessons to be learned, and the will to move on and do even better next time.

It was a sad moment but the kids easily bounced back to their usual bubbly selves and consoled each other by saying that they are still winners because they made the audience happy and they were given the chance to represent the Igorot race in a national competition such as the Dulansangan. The students’ composure and grace in the face of defeat made me think twice about the real essence of winning. To the Provincial Government of Mountain Province, the local government of Tadian, the community of Lubon, and Lubon National High School, we are still winners for making it possible for our students to reach Bulacan in spite of them not grabbing the championship as expected. We won because our students made a mark in the hearts and minds of the audience. We won because we taught our students to be proud of their cultural heritage. We won because through our concerted efforts, we produced culturally rooted yet globally competitive children who will continue to make us proud even after the echoes of the applauding audience has settled. To the participants, in our hearts, you’re already winners for proudly marching the streets of Malolos, Bulacan in your native attire despite the sudden downpour during the parade. Don’t stop believing! We may have lost the trophy but we have other several bigger winnings to count.